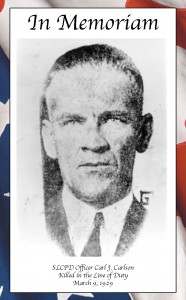 SALT LAKE CITY—The Salt Lake City Police Department remembers the loss of one its own: Officer Carl J. Carlson, killed in the line of duty March 9, 1929.

Officer Carlson died from injuries he received during a liquor raid the previous day. The 39-year-old victim and fellow officers raided 23 S. West Temple, where they located several barrels of mash. One of the 50-gallon barrels fell on Officer Carlson’s foot, causing him to jump back and strike his head against the wall.